Team behind the scenes – meet our staff

August 8, 2019 · by laurablomberg · in Eyes on Madagascar, Torotorofotsy Ramsar Site · Leave a comment

Development policy, project plans and objectives are important issues, but why not change the focus every now and then? We think it is time to pay attention to people who put the plans into practice and get things done in the field. So let us introduce to you two members of our local staff in Andasibe, Tianasoa RATOLOJANAHARY and Youssouf. They belong to the Association Mitsinjo and they are working in the Torotorofotsy project. They both have a wide knowledge of the fauna and the flora of Madagascar. Youssouf and Tiana also hold positions of trust in Mitsinjo. They belong to the “comité de reorganisation”, an auxiliary organ of administration. Youssouf is member of the Board and in 2012-2016, he was vice president. 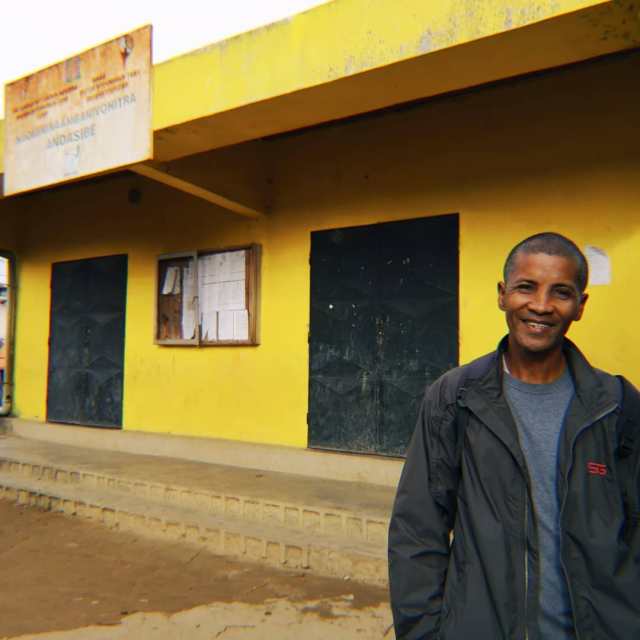 Tiana, 50, was born in the nearby town of Moramanga, but after having finished his school, he moved to Andasibe where many members of his family were living. Before joining Mitsinjo, he studied plants with a local botanist and worked 19 years in Vakona Forest Lodge, a private park in Andasibe. Tiana had diverse duties in Vakona. He was responsible for the breeding of captive crocodiles and he took care of the maintenance of the animals living in the reserve. He was also a guide and a gardener.

In 2007, Tiana decided to change employment and became a member of Mitsinjo. At first he worked as Lemur Conservation Officer participating in surveys of the Greater bamboo lemur (Prolemur simus) and in the identification of primary sites for the conservation of this critically endangered primate. In 2007, Tiana was part of the team who discovered a new population in Ihofa near the Torotorofotsy wetland. Since then, Tiana has done plenty of research. He has assisted researchers in their field studies of different animals from mammals to insects, from birds and frogs to bats and beetles. This has greatly increased his knowledge of various species. As paraecologist, he is often responsible for organising the logistics of field trips and he has even been a guide for many visitors in Mitsinjo Park and in Torotorofotsy. This year, he passed the test organised by the Ministry of Tourism and was officially authorised to practice the occupation. That means he can guide people even in other parks in Andasibe and elsewhere. From 2013, Tiana has also been mapping and classifying forests all around Madagascar for the Manondroala project with the FANC team.

In 2015, when the Torotorofotsy project started, Tiana was appointed local coordinator. He monitors the various activities, reporting regularly to the national coordinator. He gives support to the technicians who are responsible for managing the activities in the field. Tiana works closely with local people, raising awareness about sustainable development. He often meets beneficiaries of the project to discuss with them and to listen to their wishes and worries. He helped local women to form the Association of Women Menalamba Torotorofotsy to promote their pursuit of conserving the wetlands while using sustainably natural plant materials for their handicraft. He also keeps contact with the local representative of Asity Madagascar, which is the official manager of the Torotorofotsy Protected Area. Association Mitsinjo and Asity collaborate in Torotorofotsy, so it is important to coordinate the activities. 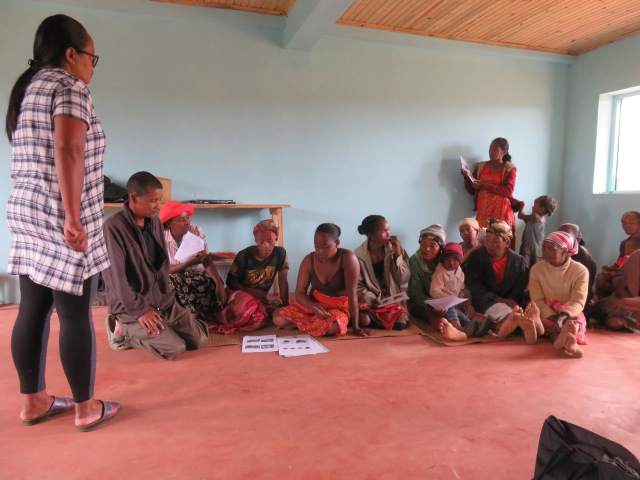 Tiana likes his work and he is satisfied with the progress of the project. Though there have been setbacks, for example harvests have been lost or have remained poor because of bad weather, on the whole the objectives set by the project plan have been reached. The project will continue until the end of the year 2020 and Tiana hopes that there will be cooperation between FANC and Mitsinjo even after that.  A new joint project is one of his wishes. 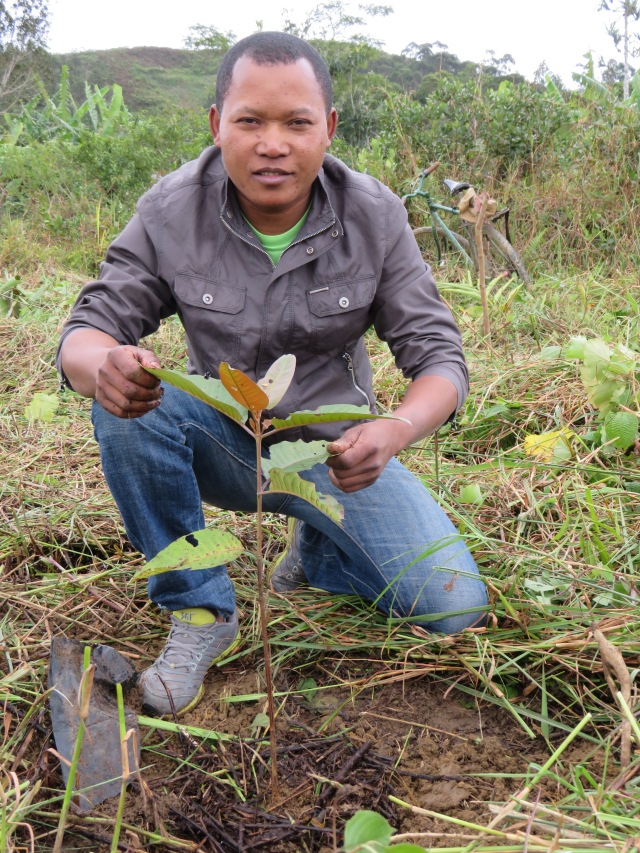 Youssouf, 44, is a native of Andasibe. He went to school in Antananarivo, where he studied forestry, agroforestry and botany for five years in DRFP (Département de Recherche Forestière), FOFIFA. After his studies, Youssouf returned to Andasibe, but continued to work with DRFP. He helped researchers to find and recognise plants. A couple of years later, he began to work in similar tasks for the forestry department of the Ministry of Environment. University students needed help in their studies of botany and agronomy. Later, he went to Soanierana-Ivongo to do awareness raising and sensitisation on conservation for ADEFA (l’Association de Défense de la forét d’Ambodiriana).

Youssouf was one of the founding members, who established Association Mitsinjo in 1999. In 2003, Mitsinjo was given the management of the Analamazaotra Forest Station, aka Mitsinjo Park. At that time, Youssouf was working in the forestry department of the University of Toamasina. He was asked to come back, because his knowledge and expertise in botany and forestry was needed. So Youssouf returned to Andasibe and since 2004, he has had various tasks in Mitsinjo. At first, he was conservation manager in charge of organising teams to patrol in the forest. At the same time, he also worked as nursery manager and was responsible for surveying the degraded forest and for creating a tree nursery for Mitsinjo. The association had received funds and restoration of the forest could begin. In order to raise awareness about the importance of reforestation and protection of nature, Mitsinjo started environmental education activities. For a while, Youssouf belonged to the education team.

In 2010-2012, Youssouf worked as technician in Toby sahona, Mitsinjo’s amphibian conservation facility, identifying frogs and breeding insects as live food for frogs. However, when the Manondroala project was launched in 2012, he returned to do reforestation. From 2015, he has also been responsible for similar tasks in the Torotorofotsy project. As tree nursery manager, he is in charge of the production of native tree seedlings used in restoration. He has trained the nursery workers and taught them how to take care of the plants. Youssouf also raises awareness of environmental issues among local people by talking with them about the relationship between man and nature and about the harmful effects of slash and burn agriculture. The members of the Menalamba Women’s Association get advice from him how to use the dry toilet that has been built in Torotorofotsy. Open defecation is general, because most inhabitants do not have access to proper sanitation. In 2014, Youssouf spent a month in Finland to get training and information on hygiene and sanitation. After that, Mitsinjo has built three dry toilets and one of Youssouf’s tasks is to look after them.

Youssouf examining a nursery managed by local inhabitants in Menalamba

This year, FANC has launched a new project, Manondroala 2. A reforestation training centre, consisting of a reforestation trail for experts and an exhibition for researchers, will be created to present the different methods Mitsinjo has used to restore the forest. In this project, Youssouf works as restoration specialist. In addition to sharing knowledge of his expertise in forest restoration, he takes care that the restoration sites along the trail are maintained and cleaned. He is also in charge of the production of seedlings for maintaining the tree nursery.

Besides working in projects, Youssouf is one of Mitsinjo’s guides. After having attended a training for the occupation, he received an authorisation from the Ministry of Tourism in 2007. The training included studies of the biodiversity of Madagascar as well as guiding techniques. Youssouf says it is interesting to work as a guide. It gives him an opportunity to discuss with tourists and visitors and to tell them about what Mitsinjo has done and what should be done to protect the environment.

Youssouf points out that the projects have contributed to the welfare of the local community. Like Tiana, he hopes that FANC would continue cooperation with Mitsinjo. He wants to thank FANC and its coordinators as well as volunteers for all the help and support the association has been given. Youssouf expresses his special gratitude to FANC for bringing him to Finland in 2014. It allowed him to learn new things and meet many people and organisations. For him, it was a great experience he has not forgotten.